Today’s dinner: Sautéed winter vegetables with shredded chicken and celery greens over quinoa with a raspberry-mustard glaze
Cooking soundtrack: The snow falling outside
What I’m avoiding by cooking: Watching the sun go down 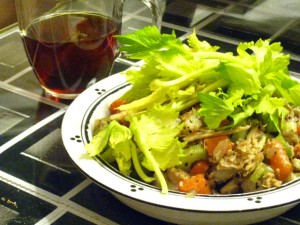 Two days ago, through an unfortunate confluence of holiday exhaustion and minor sickness, I went to bed at 5AM and awoke at 5PM. Went to sleep in the dark early morning, woke up again in the dark early afternoon. A minorly panicked call to Peter brought him to my doorstep an hour later with a rotisserie chicken from the grocery store, which we picked at greasily while watching British crime dramas. But Peter was tired after having worked all day, and I was Very Much Not.

So soon he went home and I wore a couple finger-deep furrows in the carpet pacing back and forth, trying to think of Something To Do.

The day-night swap meant it was some time in the afternoon for me, and meanwhile back in the world the bars had all let out.  I walked around the block, enough time to realize how under-dressed I was for the snow still on the ground.  There is a gay bar and three more bars a block from my apartment and I walked passed the tall stacked of chairs and the neon still on outside dark rooms and the knots of late-leavers smoking in inhospitable, locked doorways. I prodded the buttons on my cell phone, ineffectually as no one else was awake, and after I crunched up the crystalizing stairs to my apartment I discovered that no one was awake on the internet either.

I poked at the typewriter, which has a design flaw I haven’t yet decided how to correct. I opened the book I’m reading, and closed it again without getting anywhere. I sighed more than was reasonable. Everything looked dreary and dull and when I finally fell asleep it was in the company of dull, dreary dreams.

It is a whole year today that I’ve been in Pittsburgh. It’s been a dense year, filled with Stuff and School and Figuring Things Out. At the end of it I find, despite the bad days that seem to have cropped up at the close the semester, I have the faint tracings of a future career, wonderful friends (thought they are not always where I would like them to be), and more people who support me and who are proud of me and my work than I reasonably know what to do with.

Two years ago today I was carrying the worst hangover I’ve ever had on a strange trip across Texas to eat black-eyed peas, which I don’t like, with people who didn’t particularly like me. This time around I was in a warm house with good drink and good friends. I have a wonderful boy who puts up with all my nonsense with grace and understanding. Despite the occasional night-bound bad day, 2009 was a wonderful year. I’m very glad it happened all the way it did.

For all of you reading along at home, I hope your 2009 was just as wonderful. And I hope your new year is filled with good food and kind faces, that you find something and learn something, share something and make something, and that your bad days, when they come, only make your better days brighter.

Swirl a small amount of olive oil in a frying pan and set over a low flame. Toss in the onions, carrots and potato with salt, pepper and herb de provence to taste. Add one bay leaf and cover. When the carrots and potatoes can be easily pierced with a fork, add the celery stalks and shredded chicken.

I find that one quarter cup of quinoa with one half cup of water makes more than enough for me. But I have been rightly accused of eating like a bird on more than one occasion, and you might enjoy greater than chickadee-sized portions. So take as much quinoa as you like with double that amount of water and put that in a covered pot over a medium-low flame. Check it periodically, and when the water has all been absorbed, turn off the flame and set the quinoa aside, still covered.

The best celery greens are found at the center of the stalks. They range from a pale yellow-green to light green with a fresh, peppery taste. Trim the stems, wash the leaves carefully in cold water and set aside.

Take a spoonful of raspberry jam and a spoonful of whole grain mustard and mix together with a small amount of olive oil. Pour this mixture over the sautéing vegetables and turn the flame up to medium for a few minutes.

Serve the vegetables and chicken over the quinoa with the celery greens set atop the whole mess at the last minute.

Sing a little song to yourself because it’s New Year’s Day.