Sometime between the power outage Thursday night that left most of Cambridge in the dark and severely messed with my ability to construct my Ignite slide deck, and getting up at 5AM to catch a taxi to the airport, I started to have serious doubts about whether I should go to NewsFoo at all.  Reading over the guest list (NewsFoo is a by-invitation conference) was an exercise in “Oh God, everyone is so much more awesome than me.”  NewsFoo also fell on an end-of-the-semester weekend packed with PhD application deadlines and final papers I should really be working on.  I was plagued with anxiety about my Ignite talk crashing and burning, being too shy to talk to any of the  big name journalists and tech heads in attendance, and generally being the most awkward person in the room for three whole days.

You guys, it was so not like that at all.

NewsFoo was seriously the best conference I have ever been to.  Hands down.  As someone at the beginning of her career doing all this internet-academia stuff, the enthusiastic acceptance and encouragement I got from the organizers and attendees was mind-blowing.  Even though I was a first time attendee, I got to both lead a session (on depictions of science on procedural crime dramas on television) and give an Ignite talk (on the changing representations of “the hacker” in news media), both of which were very well received.  Though a lot of the attendees were experienced journalists and successful members of the politics-and-tech community, I didn’t once feel that someone was pulling rank on me, or dismissing me because I was “just a grad student.”  I was delighted to see among the attendees several undergraduates from the Cronkite School of Journalism (whose excellent campus we were crashing for the weekend).  The organizers did a great job putting newcomers on the invite list and making sure everyone was able to be fully involved in the conference.

One factor that led to this feeling of hyper-inclusion was the size of the conference. With only 120 or so attendees, it’s really hard to get lost in the crowd.  Another factor is that everyone was just really frickin’ nice and eager to engage, pretty much all the time.  I had conversations with some awesome people on topics ranging from That Time I Had a Panic Attack in a Cab in Nairobi to how Monet’s Japanese bridge paintings showcase the passage of time to how to enable more protest actions in the online space.  I went to sessions on epic fails, the internet vs governments, the Obama 2012 campaign, and TOS violations.  I also played way too much Werewolf, which is basically gamified social trauma, and is seriously too much fun. 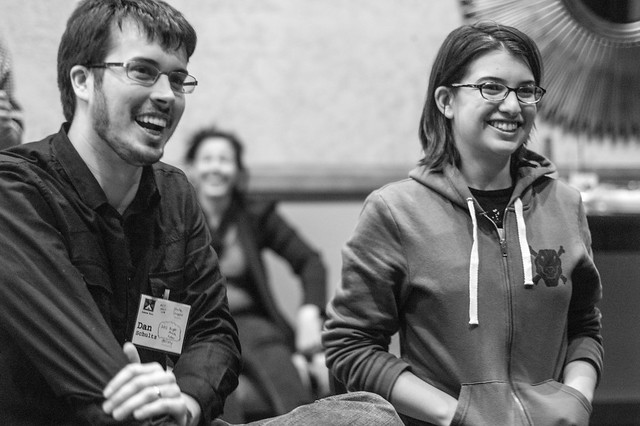 Dan Schultz and me rocking Werewolf at 2AM or some ridiculous hour. Photo by Sean Bonner

For people looking to construct their own NewsFoo type event, here are some take-aways from my first NewsFoo experience:

– Have a well-curated guest list, with attendees from different parts of the world, professional sectors, and levels of professional attainment

– Encourage active participation for all attendees – first timer? Lead a session! Because, seriously, why the fuck not.

-Have protocols in place for people to talk about confidential/controversial topics.  Where the general philosophy of active participation encouraged first-timers to participate, the “FrieNDA” concept used at NewsFoo and general de-emphasis on tweeting/blogging/otherwise publicizing the sessions allowed people who might otherwise have been constrained by confidentiality or professional concerns to fully participate in conversations. 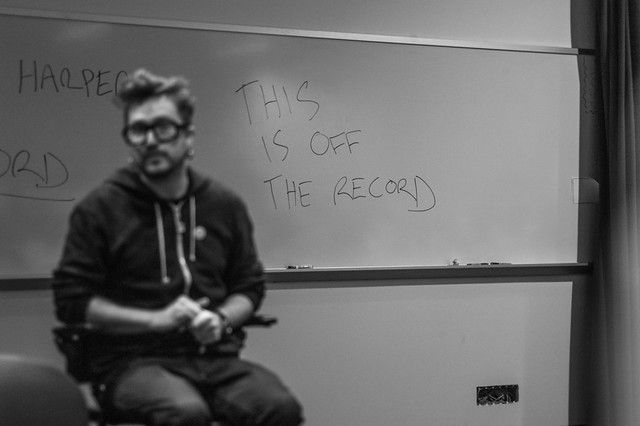 Here’s the video of my Ignite talk, “What You Say Is What You Get: Why Using ‘Hacker’ as a Synonym for ‘Criminal’ is Killing Political Speech Online.” And a big thank you to O’Reilly, the Knight Foundation, and all the other attendees for putting on such a great event and letting me be part of it.