It snowed Friday night. Big fat flakes like ticker tape, here and everywhere else, it seems. Yesterday was Saturday, so nothing was canceled except for normalcy. People skied down the middle of the street. Dogs jumped in and out of snow banks like ecstatic golden fish. We went out to find Austin’s car, buried up to its headlights in drifts and plowed under. Not going anywhere. We went back inside, made coffee and oatmeal.

About a week ago, someone, we don’t remember who, bought a loaf of good crusty white bread and then forgot about it. It’s been sitting on top of the refrigerator, looking lonely, getting stale. So, because it was a snow day, which are days for making heavy, creamy concoctions that put you in a food coma till spring, I got out the eggs and the milk and the bain marie and made a pudding.

Bread Pudding of the Snowpocalypse

Preheat your oven to 350ish. Butter your baking dish. Tear or slice your bread into one-inch chunks. The JoC says remove the crusts, I say I like them and the crusts stay on. It’s up to you. You should have enough bread to make five lightly packed cups. Dump the bread evenly in your baking dish and scatter your dried fruity bits on top. Fruit is what makes this healthy!
In a bowl whisk together your eggs, milk, sugar, vanilla, cinnamon, nutmeg and salt. No need to go nuts here, just ensure the ingredients are mixed thoroughly. Pour this mixture over your bread bits and let sit for 30 minutes. Occasionally squish the bread with a spatula so it absorbs the liquid better. Place the baking dish in a water bath and bake for about an hour, until a knife through the heart of the pudding comes out clean (like your conscience).

Serve topped with cream or milk. And small servings! This thing is dense and delicious. A slice, buttered and either pan fried or browned in the toaster oven, makes a fabulous breakfast in the morning.

In Bucks County, our fridge was full of two things: condiments and leftovers; a taxonomy of mustards and chutneys and bar-b-que sauces competing for space with stacks of white china bowls wrapped in plastic and filled with this or that congealing something or other. And then there was the freezer, crammed with icebergs that now only vaguely resembled chili or soup anymore

Leftovers are a staple in my house. There’s no time to cook during the week, so weekends I take over the kitchen and make huge quantities of something, most of which will be frozen and remade and remixed over the next fortnight.

This has been a week of odds and ends. The Great Cabbage Roll Assemblage left me with a couple cups of chopped cabbage, carrots, onions and most of a bag of Bulgar wheat. Half a bowl of mashed potatoes sat quietly congealing in the back. A container of chili in the freezer had been glowering at me for a few weeks and needed something done with it.

The art of leftovers is the art of reinvention. Yes, you could just reheat and serve them again (and again and again, like dinner in syndication) but that would be boring and make you bad person. But dinner is no longer dinner once it goes back in the fridge. Now it’s an ingredient.

So the chili ended up the base for a spicy tomato and papaya sauce, served with Israeli-poached eggs over quinoa. Last night in a fit of procrastination, the cabbage, mashed potatoes, Bulgar and vegetable leavings became a colcannon derivative, swimming in milk, butter and sour cream.

(Disclaimer: There are always safety concerns when cooking with leftovers. Cooked food spoils faster than raw, so if you’ve no plans to reuse something immediately, freeze it. Use common sense. Don’t eat anything that’s acquired a fur coat, become discolored, etc, etc, blah, blah, blah. Behave like the reasonable adults I know some of you are.)

By changing a few words and references here and there, what I’ve written here so far could easily be transformed from a minor primer on the awesomeness of leftovers into an essay on remix and appropriation in popular culture. At the heart of it is the idea that there is nothing final about the final presentation of something, be it a meal or a movie. If something has further utility, it should be used, creatively and well.

This applies to recipes as well as an actual fridge full of leftovers. The art of cooking and communities built around it embrace remix and open source philosophies naturally. The comment threads of popular recipe blogs and websites are filled with additions, edits, remixes, versions and suggestions from the audience/user/consumer. The Rombauers have yet to pelt me with DMCA take-downs, though most of the recipes I post are re-visionings of ones that appear in The Joy of Cooking. Cooking’s open-source (for what is a recipe but source code for food), sharing and teaching-based philosophy works to everyone’s advantage. When a recipe or technique gets released into the wild (either online, in a book, or by word of mouth), it not only improves the skills of the people who encounter and use it, but the recipe itself gets better. Those pages of comments, all those different versions of creamed spinach or pumpkin curry make the original recipe more valuable and useful; the most valuable recipes are the ones that get used the most, that have collected the most input from the community.

I have slightly idealized the prevalent cookery culture with regards to IP law. But the focus of the community has and continues to be on attribution when it comes to the use and reuse of existing recipes, not payment and control. Cooking communities encourage derivative and appropriative creativity and knowledge sharing as good creative practice. It’s all just so damn intuitive, isn’t it?

So, to paraphrase a t-shirt I wish I had: Get excited and make things out of other things.

Combine your leftover base in a heavy bottomed pot with the diced tomatoes, chopped fruit, and chili peppers and bring to a healthy simmer. Crack in your eggs, reduce the heat and cover. Stir gently and occasionally to prevent the eggs sticking to the bottom of the pot and burning, but otherwise, ignore until the eggs are set.

When eggs are set, spoon them out with a healthy portion of sauce and serve over quinoa. Discard the chili peppers.

chopped cabbage (because this was leftover from making cabbage rolls, what I had was already cooked. You may want to blanche yours.)
mashed potatoes
one small onion, chopped
(this is where the pseudo comes in. Traditional Irish colcannon contains cabbage, potatoes, leeks and cream. But I was more concerned with using up my vegetable stash than with historical verisimilitude. So, for the purists, not real real colcannon. Real pseudo colcannon.)
chopped carrots
frozen peas
Bulgar wheat (I had less mashed potatoes than I originally thought, so I added the Bulgar wheat to give the dish more body. The added vegetables made it unnecessary, though, and I’ll omit it next time.)
whole milk
butter
sour cream
salt, pepper, thyme

Basically, combine all the above in a pot, simmer, stir and serve. Add the sour cream, salt, pepper and thyme last, to taste. Peter insists on eating this topped with cheddar cheese, but then again that’s how he eats damn near everything.

Today’s dinner: Potato Latkes and spinach salad
Cooking soundtrack: Radio Lab-“Stress,” “Who Am I” and “Emergence”
What am I avoiding by cooking: Folding laundry 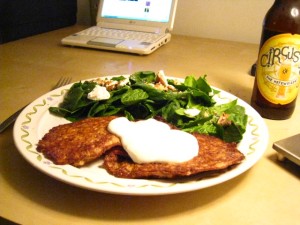 Tonight’s recipe is adapted out of my Joy of Cooking, which I’m finally making use of after receiving it from my well-meaning grandparents when I left for college the first time, nearly six years ago. (Good lord, now I feel bad…) The good ol’ JoC doesn’t include carrots in their recipe, and also calls for less onion and flour. For those of you reading along at home, you can find their recipe on page 298 of the 75th Anniversary Edition.

I still had some carrots chilling out in the fridge after the Split Pea Soup Incident earlier in the week. Unless they transformed into something tasty quickly, they were going to go all wilty and floppy and unappetizing. So out they come, onto the table where I stare at them for a few minutes, hoping they will pipe up with some clever idea. “Think, think, think,” I say in my best Winnie the Pooh voice. Aha! There is the Mondo Bag of Potatoes and the Equally Mondo Net of Onions in the pantry! And eggs and flour and butter and oh joy! I can make latkes!

(But they will have to be Late Latkes, because Hanukkah is several days over by now.)

(Alright. But we won’t tell them because that’ll just make them feel bad.)

(This recipe gave me about nine latkes, three to a serving.)

Two mediumish red potatoes, washed and grated.
One smallish onion, finely chopped. (You could grate the onion like the JoC says, but grating an onion with a hand-grater is one of the most painful cooking experiences I have ever had that doesn’t involve the letting of blood. But perhaps you have more manly eyes than I.)
Two largish carrots, tops off, washed and grated.
Three eggs
Two tablespoon flour
One and one quarter teaspoons salt
Lots of butter
Sour cream or applesauce! (for toppings)

Take your grated potato, wrap it in a clean dishrag or paper towel and wring the water out over the sink. Combine the potatoes, carrots, onions, flour, salt and eggs in a bowl.

Take a large frying pan, place over a high flame and throw on a generous amount of butter (or vegetable oil for the health conscious. But really, health conscious people should not be making latkes anyway). There should be sizzling. Drop the latke goop into the sizzling butter one spoonful at a time from not too great a height (if you fancy the shade your skin is now), and flatten to make pancakes of two to three inches in diameter. Fry about five minutes on each side and turn the flame down to medium if you notice scorching. Add more butter between each round of latkes.

As the latkes come off the pan, set them on a paper towel to drain. Soon you will have a piles of delicious wonderfulness, and all your neighbors will come to your door for one. And you should give them one, because you are not a terrible person and you have at least six more latkes then you should reasonably eat. (These things exist only as conveyances for butter and sour cream. Really, you should share.)

And then, of course, dessert. 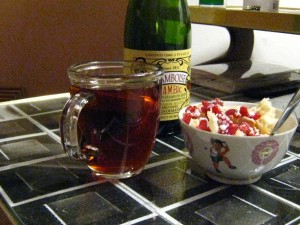 Crusty white bread on just the wrong side of stale, broken up in a bowl topped with torn up raspberries, honey and cream. One of my absolute favoritest desserts ever.