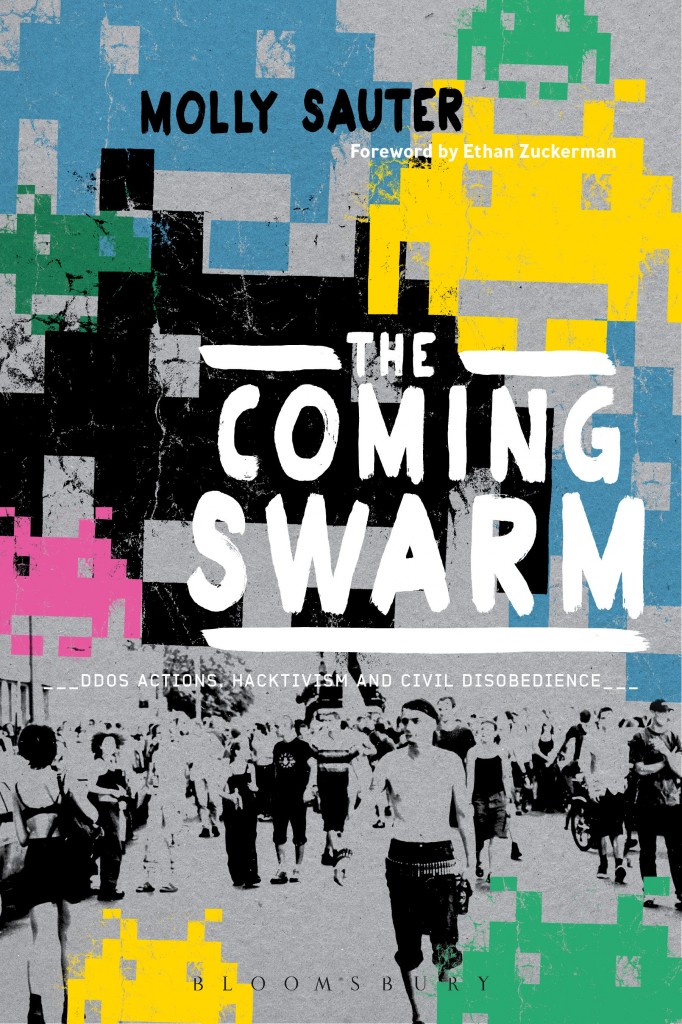 (or download the full text here and support me on Patreon)

In The Coming Swarm, M.R. Sauter examines the history, development, theory, and practice of distributed denial of service actions as a tactic of political activism. The internet is a vital arena of communication, self expression, and interpersonal organizing. When there is a message to convey, words to get out, or people to unify, many will turn to the internet as a theater for that activity. As familiar and widely accepted activist tools—petitions, fundraisers, mass letter-writing, call-in campaigns and others—find equivalent practices in the online space, is there also room for the tactics of disruption and civil disobedience that are equally familiar from the realm of street marches, occupations, and sit-ins?

With a historically grounded analysis, and a focus on early deployments of activist DDOS as well as modern instances to trace its development over time, The Coming Swarm uses activist DDoS actions as the foundation of a larger analysis of the practice of disruptive civil disobedience on the internet.

Read excerpts on BoingBoing and io9

One of Science Friday‘s Best Science Books of 2014

“…a thought-provoking little bomb of a book that raises issues activists in 2014 can’t afford to ignore…” -Astra Taylor, documentarian and author, The People’s Platform

“Questions about online protest tactics have never been more fraught—as the analog police militarize their response to legitimate dissent, so, too, have the Internet cops decided that any online protest is cyber-terrorism. Sauter’s work places one of the most urgent political questions of the 21st century into much-needed context.” –  Cory Doctorow, EFF Fellow and co-editor of Boing Boing

“Do two wrongs ever make a right? Sauter deftly shows how the injustices of our asymmetrical media landscape motivate and in some ways justify illegal online attacks. How much collateral damage to the network, if any, is ethical when lives are at stake in the real world? And how does public perception of hackers both inhibit and enhance the effectiveness of their efforts? While there may be no easy answers, The Coming Swarm is a landmark contribution to a conversation that needs to be initiated right now.” –  Douglas Rushkoff, author, Present Shock and Program or Be Programmed

“While DDoS actions have only recently entered the public consciousness, they have a vibrant history in the realm of political activism. Drawing on disciplines from political philosophy to social movement theory, Sauter illuminates the importance of DDoS actions to modern democratic discourse, and contextualizes them in the evolution of political activism as it has moved from the streets to their elusive online counterparts.” –  Jonathan Zittrain, Vice Dean for Library and Information Resources, Harvard Law Library and Faculty Co-Director, Berkman Center for Internet and Society

“The Internet has increasingly attracted passionate citizens who engage in disruptive acts of direct action to voice dissent. Erudite in its analysis and written with grace and style, The Coming Swarm is the definitive account on the DDoS campaign. Sauter’s compact book covers vast ground to advance a compelling argument: the political use of DDoS merits recognition as civil disobedience. She deftly considers the tactic’s history, the technological and cultural changes underwriting its contemporary manifestation, and the laws seeking to stamp out its existence. Theoretically informed and empirically rich her book is essential reading to understand the veritable explosion of online dissent today and why, given multiple threats, its future stands in peril.” –  Gabriella Coleman, Wolfe Chair in Scientific and Technological Literacy at McGill University

“The Internet is changing the nature civil disobedience. Sauter’s book is an interesting and important discussion of political denial-of-service attacks: what has come before, and what’s likely to come in the future.” –  Bruce Schneier, Author of Liars and Outliers: Enabling the Trust that Society Needs to Thrive and Schneier on Security

“In The Coming Swarm, Sauter provides deep historical and philosophical context to online “denial of service” attacks, examining the participants’ motivations and their portrayals in the media, whether as terrorist, hacker, artist, or nuisance.” –  Clay Shirky, Associate Professor, NYU, author of Here Comes Everybody

“…a strong and timely reminder of a nearly forgotten history of Internet radicalism and a reclamation of DDoS as a legitimate tool for civil disobedience.” Guobin Yang, Contemporary Sociology, American Sociological Association, Vol 45, Issue 2, 2016

“…provide[s] [a] thorough analysis of activism in the age of new media and offer[s] a critical appraisal of digitally mediated potentials for progress and democracy…” Mariam Betlemidze, New Media and Society, Vol 18, Issue 5, 2016

“…a valuable source for researchers, activists and even policymakers, and it should find specifically a home on the shelves of social movement and collective action scholars.” Leonie Maria Tanczer, London School of Economics and Political Science Review of Books, May 2015

“…essential for those who are interested in the future of activism and the role that the internet might play in it…The writing is a major plus: rigorous, academic, but still easy to understand and interspersed with moments where the author’s passion about the topic shines through.” – Sofia Romualdo, The Curious Curator

“The Coming Swarm is thoroughly thought-provoking and meticulously researched… It will be an important contribution as more enlightened public policy makers try to understand digital culture rather than just contain it.” – PCMag

“…[The Coming Swarm] is an excellent source on the history of the tactic.” – Kevin Carson, Center for a Stateless Society

“The History of DDoS Attacks as a Tool of Protest,” Joseph Cox, Vice Motherboard, October 2014