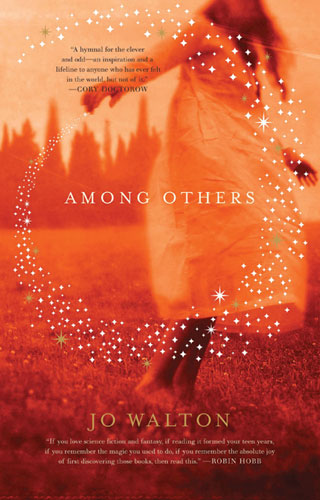 A few weeks ago I finished Among Others, Jo Walton’s most recent book.  It’s been circling around in the periphery of my vision for a while now (it came out in January of 2011).  It’s hard to find the time for non-school or research-related media, and honestly, at the end of the day when I finally escape the lab sometimes I just want to sit in a corner, knit, listen to Philip Glass, and never interact with another written word as long as I live.  But when Among Others won the Nebula, the Hugo, and the British Fantasy Award in quick succession this year, I decided to hack some time out of a weekend and read the damn thing.

Since then, I have been evangelizing this book to everyone I know.  You guys, this book is just amazing. But every time I try to tell someone just how amazing Among Others really is, I get nervous and quiz them about their readings habits first.  Because if you haven’t read a rather staggering amount of English-language science fiction from the 1960s and 1970s and internalized it at a deep level, I’m afraid you will not get most of this book.

The main story of Among Others is that of a Welsh teenage girl sent to a British boarding school after a cryptic accident kills her twin sister in the late 1970s. That’s the surface story.  The actual meat of the book is in Morwenna’s ravenous absorption of dozens upon dozens of contemporary science fiction and fantasy novels, and the ways in which these books help her make sense of her life and her world.  Written as a diary, the book’s prose is heavily peppered with references to these texts, which can either fill the reader with a deep feeling of joy and connection when recognized, or an abiding sense of being left out if not.  There is one section near the beginning of the book where Morwenna talks about the post-industrial Welsh countryside she grew up in, after the collapse of the iron and coal industries. As a child, she thought she had been playing in a fairyland, when she had actually be surrounded by the rotting artifacts of failed industry.  The line, “I named the dramroads after places in the Lord of the Rings when I should have recognized that they were from The Chrysalids,” literally made me squeal out loud because I read The Chrysalids when I was twelve and I knew exactly what she was talking about. But only a handful of people I know (especially age-peers) have ever read The Chrysalids or The Day of the Triffids or John Brunner’s Stand on Zanzibar.  And I worry that if you haven’t, you won’t have the same intense feeling of connection to this book that I did.

A central thread in the book is Morwenna’s search for her karass, which is a concept from Kurt Vonnegut’s Cat’s Cradle. A karass is a group of people who, perhaps unknowingly, are working together to achieve a purpose larger than themselves.  The book uses this concept (which I admit I had to look up, because I read Cat’s Cradle a long time ago, and it didn’t has as much of an impact as The Chrysalids or Stand on Zanzibar or Do Androids Dream of Electric Sheep or His Dark Materials, which was *the* defining work of my childhood, hands down) to show that strong, intimate, necessary communities can be made through the consumption and internalization of this type of media.  I will probably never meet Jo Walton, but in the moment when I read that Chrysalids line, I felt a tangible connection to her and to Morwenna, and it was (not to overuse the word) amazing.  Among Others plays with both the discovery of yourself in books (in Morwenna’s reactions to the books she reads and in the reader’s reactions to the references made), and the discovery of the community of people bound together by the books they’ve read and loved. A substantial part of this book’s power to evoke that lies in how intensely personsal it is.  This book is winning SF/F awards hand over fist because it’s brilliant, but also because the people who hold respected positions in the SF/F community and who give out these awards now were coming of age at the same time as Morwenna is, and were reading these exact same books.  In a real sense, this book is about a specific temporal subsection of SF/F fandom, and a rather exclusive one.  Those young’uns who cut their fandom teeth on His Dark Materials or Neverwhere or Harry Potter in the 90’s are left out.

In the end, I feel about this book mostly the same way I feel about Community. I really love Community. I love it because it deals in a complex language of  television and movie tropes, symbols, and references,  using a media-saturated lexicon that I am very comfortable with.  If you don’t swim in that sea, the show can come off as silly, gimmicky, awkward, and random.  My reaction was somewhat more akin to “Where have you been all my life?” ::swoon::. But Community as a text is more accessible to the people around me now than Among Others. I have connected strongly with one other person about Among Others, and it’s no surprise that he is an old friend upon whom I often pressed books in high school.  I have connected with many many people about Community.  In the end, the connectedness Among Others presents its readers with may be too narrowly drawn to have the same long-lived relevance that the books it draws on have enjoyed.