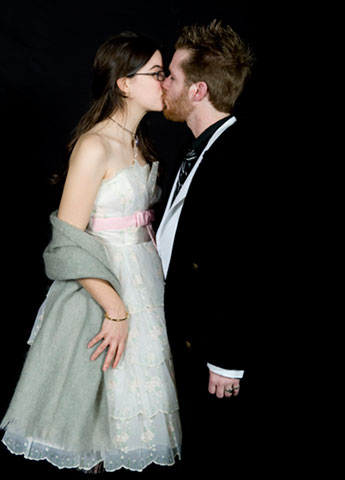 thanks to Russ at Twisted View Photography for the picture.

He comes back to the apartment, sneaks the Joy of Cooking off the shelf and then doesn’t let me in the kitchen for an hour and a half while he does something with flour and sugar, loud crashes and his sister’s bright red KitchenAide mixer.

A week ago it was chocolate chip cookies with cashew butter.

Last night it was Fail Brownies.

Maybe he mixed the batter too long, or maybe he didn’t let the melted chocolate cool long enough. In any case, what came out of the oven was not, strictly speaking, brownies.

Instead of one dense cakey layer, there are two. There is a thin top layer, like a coffee-colored cloud of meringue. It’s dry and chocolatey, sweet and dense. It lifts more-or-less cleanly off the bottom layer, which is like the wonderful moist inside bits of a chocolate bread pudding.

We stood around the stove in the kitchen, and ate it out of the pan with spoons.

Whatever his mistake was, I hope Peter makes it again. And soon. 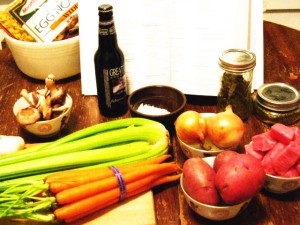 Peter’s presence in the kitchen was an accident of timing.

He’d come over in the afternoon to help with the grocery shopping. With more than one overnight guest arriving in the next few days and start of term on Wednesday, supplies were needed beyond the tin-foil wrapped slab of cheddar and the last slice of bacon which were all that remained on my side of the refrigerator. So he’d come to help carry the milk and bread and eggs and juice and bags of vegetables home through the snow, which was lovely of him. But now he was in My Kitchen. Hanging Around. Trying to Be Helpful.

I don’t let anyone help me cook. I’m more likely to drive you from the kitchen at the point of a paring knife than I am to let you touch anything more important than a potato peeling while I’m working in my kitchen. This makes it sound like cooking alone, for me, is about quality control. It’s true that the last thing people often hear as I shoo them away from the cutting board is, “You’re doing it wrong.” But that’s mostly rhetoric to keep them from coming back.

Like painting, cooking is about touch, motions, and sensations which can only be translated, imperfectly, into words. Learned motions, chopping, stirring, spinning from the stove to the counter top and back, become instincts. The physicality required knits your senses together so that scent, taste, sight and sound become a vibrant whole, rather than disconnected, atomized sense packets zinging about your brain and mostly ignored. Beyond instruction, words here just get in the way, trying to be indispensable where they’re simply irrelevant.

Other people bring words with them. The air get clogged with Directions and No-Not-There’s and How-Do-I’s and Where-Do-I’s. Words demand attention, and your senses fall apart again, turning back into background noise.

So I prefer to cook alone. Sometimes, if it’s something simple or with a lot of down time, I’ll turn on a podcast or audiobook. But usually it’s quiet, except for the sounds of the activity itself.

So Peter, wedging himself awkwardly in the dusty alcove between the stove and the cabinets, trying to be Helpful, was going to be a Problem.

I asked him to set out the ingredients and I pulled out my camera, a small, silver, point-and-shoot thing. Peter made coffee and I snapped a few shots of the ingredients pile, rearranged some things, took a few more pictures.

“Here,” I said. “Hold these carrots tops and look dubious.” 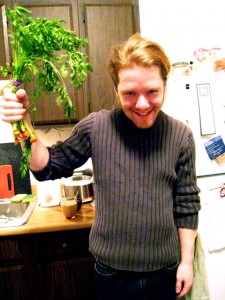 “…I meant dubious about the carrot tops. But I suppose you captured the moment.”

“Is this weird? With the camera and the cooking? Because I think it’s fun.”

“Honey, as long as you’re cooking for me, I don’t care how you do it,” Peter said. “Unless you could somehow work in high heels and an apron.”

I threw a potato peeling at him. He laughed and handed me a cup of breakfast coffee (milk, two sugars).

He washed vegetables, tended to one thing while I tended to something else. Then, when I had settled into the happy wordless instincts of my kitchen, he slipped out without me noticing.

I slipped the last of the ingredients into the simmering pot, covered it, turned the blue flame down low. Peter was wrapped in blankets on my bed, sipping his coffee, paging through the book he’s been reading for about a month now.

“Hey you,” I said, sliding in next to him and kissing his forehead.

And then the lights went out.

Outside, the night sky was orange with ambient light, but all down the block the houses were dark. We flipped open our cellphones long enough to find candles, but then turned them off, trading their cold blue glow for warm flickering tea-lights we held in our hands.

“Does this mean we don’t have to do the dishes?” Peter asked. 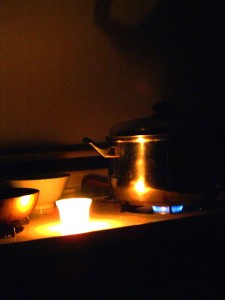 …we went to the bar instead.

Traditionally, this dish contains only beef, onions and garlic, served with boiled new potatoes. However, I’ve added more vegetables and generally serve it over egg noodles to make it go farther. The more traditional version can be found in your Joy of Cooking on page 480.

Three red potatoes, chopped
Two small onions, chopped
Three celery stalks, chopped
Handful of mushrooms, sliced (I used shiitake, though any not-boring mushroom will do.)
Two or three garlic cloves, diced
One lb. lean stew beef
Flour
salt, pepper, herb de provence, bay leaf
Beer! (The darker the beer, the more intense the flavor will be. Too dark a beer will leave a bitter aftertaste. This can be remedied with a spoonful of honey or by adding a caramelized onion to the stew at the end.)

Coat the stew beef with flour, and brown it in frying pan with butter, salt and pepper. When the meat is browned, put it in the stew pot with the garlic, onions and about half a bottle of beer. Bring this mixture to simmer and cover.

Deglaze the frying pan and quickly saute the carrots, potatoes and celery with butter, herb de provence, salt and pepper over medium high heat. Add to the stew pot with one or two bay leaves.

In the same pan, quickly saute the sliced mushrooms and set aside. These will be added to the stew at the last stage.

The stew should simmer over a low flame for two to two-and-a-half hours, or until the meat is fork-tender. Hopefully, your power won’t go out.

Before serving, add the mushrooms and cook for five or so minutes. serve over egg noodles if you’re feeding a large number of people, boys, or you’re a college student on a limited budget. 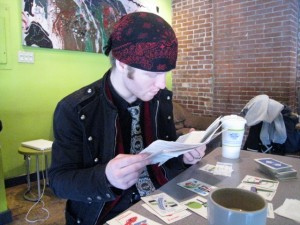 And even though it’s his birthday, he still got up 20 minutes earlier than me, woke me up with coffee and toast with jam, and made sure I wasn’t late for class (which would have been awkward, as I’m the instructor).

I am a very very lucky girl.