I’ve spent the last few days working on breaking down this Wikileaks explosion currently happening all over the internet. The result is this FAQ JZ and I have put together, which has gotten a lot of play around the internets.

There are a few things about this situation that are troubling me. Primarily, there is the issue where I personally cannot download or read any of the cables. Or, at least, I have been strongly advised not to, because at some point in the future I might want to have security clearance. If you know me, you know I react really badly to people telling me I can’t known things. There’s analysis that I want to do, that I believe is important to do, that involves me accessing the original text of the cables. I’m currently unable to do this analysis, under advice from people I trust. Whether I’m going to continue to abide by their advice remains to be seen.

On the other side of things, I’m working on a paper about hacktivism with a security researcher friend of mine. DDOS attacks have obviously attracted a great deal of attention in recent days. I’ve stated before that a DDOS attack is not the cyber equivalent of a sit-in: a DDOS attack silences opposing speech. It is not productive engagement, it is reactive censorship. The challenge is to push the development of hacktivist tools and practice that don’t merely silence speech and destroy property, but instead promote awareness and public debate. I’ll post more thoughts on this as I have them.

In the mean time, I’ll continue to update the FAQ, and will begin posting a deep-link analysis of the cables, the coverage, and hacktivists actions sometime in the next few days. (I’ve got this thing called the LSAT coming up on Saturday. Very minor. Totally not important at all.)

If you have questions that you want answered about any of this, let me know. I may not be able to answer them right away, but I’ll try. 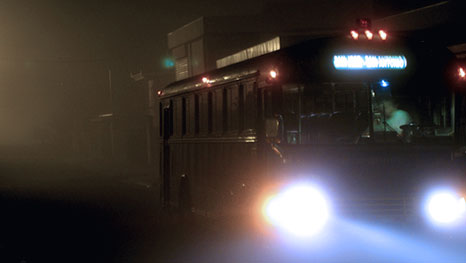 My new plan is to kidnap a Pittsburgh city bus, paint it black, and drive it around the city like a silent wind, picking up beleaguered citizens stranded at bus stops, and taking them to their far-off destinations in the blink of an eye. And when they try to pay me, I will laugh my booming hero laugh and say, “No no, citizen, tis all in a days work!” And then I’d ride off into the sunset, and the world would rest safely in the knowledge that whenever the Port Authority drops the fucking ball, the BUS THAT ACTUALLY SHOWS UP ON TIME will save the day!

Brought to you by my waiting in the cold cold cold for a bus that eventually showed up forty-five minutes late.

…why do they even *have* schedules?

thanks to flickr user linkzilla for the cc-licensed source image. the original photo is linked above.

Today, when Peter and I left the house, I grabbed the camera, saying, “I want a cupcake. No, I mostly just want a picture of a cupcake with a candle in it. But then I’ll probably eat it anyway.”

We succeeded in the cupcake part of the mission (there is, believe it or not, a cupcake cafe a block and a half from my house), though I did have to pass up a million (or slightly less) jigsaw puzzle pieces scattered on the sidewalk behind the grocery story (Peter was late for work).

But the thought this ramble brings me to is this one: I stumbled-in-an-internet-way across this lesson plan from the New York Times about illustrated opinion columns. It grounds itself in the work of Maira Kalman, whose bloggings and occasional printed columns are a mix of hand written text, paintings and digital photographs.
I’ve only recently started taking and posting more pictures of my life. It’s quicker for me to take a picture and throw it up than it is to compose what I think of as a decent blog entry (I think in pictures, twitter updates and ten-page essays).

To me, though, a photograph or a drawing or painting is a far more personal method of communication than something written. Is this a holdover from when photographs were scare, intimate objects? Fifteen years ago, you’d have to page through endless albums, sift through dusty shoeboxes, hold curling strips of negatives up to the light if you were looking for a picture. Photographs were magical things to me. You looked at your world through a box, then you send its guts far away, and when the guts came back, there was your world! All flat and square and glossy in a way the world never is normally. And you put those flattened worlds in a book or a box and usually forgot about them. They were never really looked at, except on special occasions, Let’s Embarrass the Children occasions.

On my Flickr account, I have one picture which has been viewed over 250 times since I put it up. Five people I don’t know “call it a favorite.” I’m flattered, really. It’s a picture of my blue Royal typewriter, the one that met with an accident getting shipped home from Texas.

It’s a facile point, perhaps. Obviously, a photo now (a digital photo) isn’t scarce. And the modern teenager can embarrass them-self far more completely photographically with the internet than their parents ever could with baby pictures. But, because of that scarcity connection perhaps, I still feel that a story told with images is far more personal, unique and intimate than one told exclusively with words.

One last thing. I collect found objects, usually pictures and notes. I keep them all tacked to a corkboard in my room by the door. (It was heartbreaking to walk away from that jigsaw puzzle…) The pictures are my favorite. I find a disproportional number of children, grinning in amusement parks or clutching stuffed creatures bigger than them. It’s the artifact, in these cases, that feels special. With found objects, it’s the singularity of the object (and the experience of finding it) that make up the appeal. Digital visual stories (especially of the “handmade” variety, like Kalman’s), the appeal is in the intention. Is this a practical separation between unique artistic intention and creation of an artifact?

And with that, bed time, I think.

I had a lovely birthday.

The thing that fascinates me about AGT is how it represents (or seems to represent) a throwback to the old studio system of Hollywood (I realize that this has been building for some time in these types of shows, but it seem particularly apparent in AGT.  The acts are straight out of Vaudeville, and I’m not just looking at the auditions.  In the Top Forty this season there were/are a magician, an impersonator, prodigies and virtuosos of several stripes, freaks & (old school) geeks, comedians, weirdos, children and dogs along with the more popularly expected singers and dancers.
Along with the throwback nature of the acts, the networks have *finally* figured out how to make appointment TV work, and it’s not with the voting (though that’s certainly very important).  The nature of the acts themselves emphasis the artifact of the singular performance.  American Idol has nothing but the voting dynamic to create the need for immediacy, because the individual performance of the song is fairly indistinguishable, in terms of dramatic value, from original broadcast to rerun to Youtube clip to cd release.  But magic acts or acrobatic dance acts or virtuosic piano acts or glass chewing acts or chainsaw juggling acts or burlesque acts contain within themselves drama as *performances*.  You see a magic trick once before you start to analyze it (this particularly comes out in the YouTube clips of the Drew Thomas Magic acts). With geek, chainsaw juggling or other death defying acts, you only really watch it once, and when they’re not dead by the end of it, you don’t need to watch it over and over again (unless you’re showing it to your friends). The drama of the performance is diminished once you know they don’t drop a saw on their heads or choke on a lightbulb.  Virtuoso and acrobatic performances are of a similar species (will they succeed or crash figuratively or literally), ad similarly the value of the act is in the artifact of the individual performance, not in the value of the act itself.
So so far we have two major throw-back elements, both in the types of acts and the live-performance-heavy-nature of the acts themselves. The final throwback element I see is in the prizes.  The million dollars is by now fairly standard, and by current economic standards pretty paltry actually.  Moreover, that is not what the acts are focused on, as shown in their individual interviews.  The acts focus on the prize of a show on the Vegas Strip.  Vegas is a throwback city, in terms of morality, in terms of the kind of entertainment available there, in terms of the sheer scale of the  place.  It calls up associations of the Rat Pack, The Godfather, Prohibition, deserts and oases both, and a delicious disregard for the consequences of actions.  The prize could just as easily have been a show in Carnegie Hall or in LA, but the producers specifically chose Vegas.
Unlike most reality/competition shows (and I am hesitatingly including American Idol in this category) AGT is not a 15-minutes of fame show.  It is about the old studio system, where small town talents were “discovered” by studios and hand reared to fame, fortune, and life-time exclusive contracts.  The dream being sold is not “You too can be on TV and get paid 100k to eat a bug.”  It’s “You too can be an entertainer (NOT an artist), because we are opening up the studio system to you.”
I’m also fascinated that none of the judges are actually American.  But I’ll leave that for another entry.

EDIT: David Hasselhoff is American. For some reason I thought he was German.